In a previous post I summarized the crucial changes to the Nutrition Facts label implemented earlier this year by the FDA. Click here to read that post in case you missed it.

When I first laid eyes on the new label, I couldn’t help but wonder if they made any of the changes I recommended back in 2014, which I submitted during the public comment period that followed their initial label proposal. It had been two full years since I submitted the comments, so I had to pull up my copy of the comments to refresh my memory.

Okay, so here is a look at the initial proposal from the FDA in 2014:

Right off the bat there were several things in this initial 2014 proposal that didn’t make sense to me. I had concerns about the Serving Size prominence, the changed Amount Per Serving heading, the %DV column’s movement to the left, the movement of Potassium to the bottom, as well as the regulatory text pertaining to the new Added Sugars declaration: 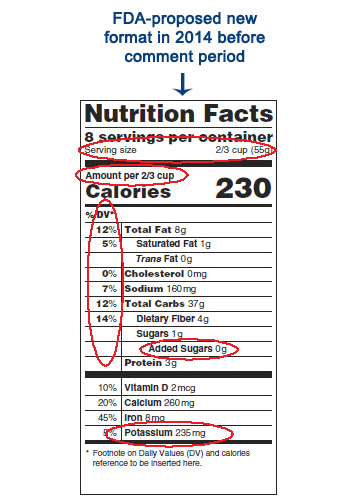 As a nutritionist and consultant to the food industry who has been studying FDA food labeling regulations for over 15 years, I’ve seen comment periods come and go over the years but have never felt compelled enough to submit any particular comments or opinions that I had. This time was different, though. The Nutrition Facts label is a big deal in terms communicating important information and empowering consumers to make intelligent nutritional decisions, and this was the most significant change to the label in over 20 years! I felt it was my duty to articulate my concerns to the FDA, and so I put pen to paper and sent my comments off to the FDA using their online comments submission form.

My comments, which can be viewed here in detail, included six recommended changes to the proposal, including five that pertained to specific changes the FDA was proposing and one original recommendation.

Fast-forward two years, now with the finalized label in hand, I was able to quickly confirm that, out of the six changes I recommended, the FDA agreed with and implemented three of them. They agreed with moving the %DV values back to the right side, increasing the prominence of the Serving Size declaration, and changing the heading above Calories back to “Amount Per Serving”. These three changes were arguably the most impactful of the changes that I recommended, so I was quite happy to see this. 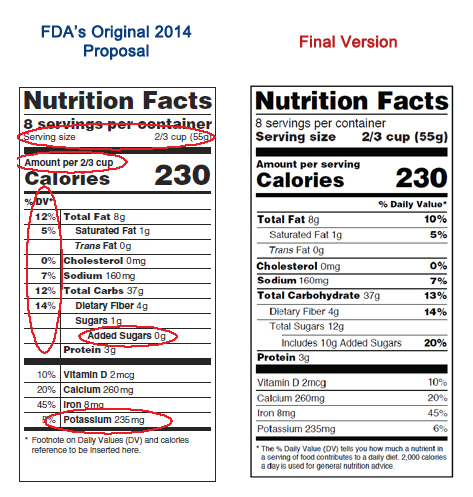 Even though the FDA didn’t agree with all of my recommended changes, I am happy because the ones they did agree with were the ones pertaining to the most impactful design changes featured in their initial proposal.

Of the three changes they didn’t agree with, two of them were mentioned in the Final Rule document, including my suggestions that natural honey should not be counted as “Added Sugars” and that the now required Potassium declaration should not be moved to the bottom vitamin/mineral section but should stay directly below Sodium. I appreciate that the FDA took the time to respond to these two recommendations in the Final Rule, however, I wasn’t necessarily in agreement with their counter-arguments:

In the case of exempting honey as “Added Sugars”, the agency insists on grouping honey with other highly concentrated/refined sweeteners such as maple syrup, claiming that it has no significant nutritional value and is “empty calories”. On one hand, I would agree that honey doesn’t meet the criteria that normally defines a food as being “nutritious” in the FDA’s eyes, in terms of providing 10% DV or more of one of certain essential nutrients. However, I believe that natural, unfiltered, unrefined honey should still be considered as a “whole food” item due to its natural occurrence, unrefined nature, the known historical role of natural honey in the human diet, its content of natural antioxidants, and the fact that honey does contain trace amounts of 11 essential vitamins and minerals. I also don’t think it is fair that the FDA requires honey to be labeled “Added Sugars” while exempting various types of fruit juice concentrates from the definition of “Added Sugars”, when many such fruit juice concentrates are almost 100% sugar in composition, highly concentrated, and filtered/refined by nature.

In regards to moving the Potassium declaration to the bottom, the FDA rationalizes their decision based on Potassium having recently been assigned an RDI rather than a DRV, and therefore it should be positioned with the other “RDI” nutrients at the bottom of the label. I don’t agree that just because it is now being assigned an RDI that it justifies moving it to the bottom portion of the label, away from Sodium. Strangely, in their response, the FDA doesn’t acknowledge that Potassium, when declared voluntarily, has always been listed directly below Sodium prior to this new regulation, nor do they acknowledge the original reasons for this location. I find this omission to be an unacceptable flaw in their argument to attempt to justify a change in regulations. Surely there is a reason why Potassium has always been listed right below Sodium (voluntarily). It always made perfect sense to me, considering Sodium and Potassium’s similarities in chemical nature and closely related nutritional and biological roles. Also strange, is that the FDA stated in their response to my comment that I “did not provide any evidence to support the claim that having sodium and potassium near each other on the label would help consumers understand that these two nutrients and their respective amounts in a food are related“. First off, it should be noted that this response is illogical because nowhere in my comment did I argue that putting Sodium and Potassium near each other would help consumers understand the relationship between the two. Rather, my argument was simply that the FDA should keep Potassium, where it always has been, adjacent to Sodium, due to, as I stated in my comment “the fundamental importance of the relationship between Sodium and Potassium on the cellular metabolic level and the proven role that dietary Potassium plays in augmenting the relationship between dietary Sodium intake and blood pressure pathology“. Even within the Final Rule document referred to herein, the FDA clearly acknowledges the scientific consensus regarding the fundamental nutritional relationships between Sodium and Potassium, stating in regards to Potassium “…AI (Adequate Intake) for the general population is set at a level to maintain blood pressure, reduce the adverse effects of sodium chloride intake on blood pressure, and reduce the risk of recurrent kidney stones.” The FDA also cites the conclusion from studies regarding Potassium “indicating that the adequacy of intakes is very low“, and they cite the existing health claim which they allow for qualifying Potassium-rich products, which states “Diets containing foods that are good sources of potassium and low in sodium may reduce the risk of high blood pressure and stroke,”. Yet somehow they conclude that moving the Potassium declaration down to the bottom of the label, away from the Sodium declaration is the better idea. Well, as they say, you can’t “win ’em all”. At least Potassium will now be listed on all labels now. I just hope consumers see it all the way at the bottom!

Despite the aforementioned points of difference, I wish to conclude this post with a statement of sincere appreciation for the FDA. I give them kudos for their commitment to science, for their active engagement of the public and the food industry, for creating a relatively user-friendly online comments submission form, and especially for listening to someone like me who is not a Ph.D., M.D., or some “big wig” lobbyist for the food industry.

That’s all for now. Thanks for reading. Comments welcome!